Science Says You’re Probably Not As Good At Multitasking As You Think.

Did you know multitasking can temporarily lower your IQ by 15 points? Cut out this harmful habit and check out these other meeting tips to get the most from your meetings.

We’ve all been there. You’re sitting in a meeting and Brad from Accounting is giving an important presentation, but your phone keeps pinging. With your phone under the table (which, by the way, everyone can see), you’re responding to texts while looking vaguely interested in the direction of the presenter. Poor Brad.

You think to yourself, I’m a master at multi-tasking. You believe you can glean all the information necessary from this meeting while also keeping up to date on the rest of your to-do list. You’re a pro at multi-tasking, right? Well, according to science - probably not.

What Exactly Is Multitasking?

Multitasking (as you likely know) involves simultaneously working on different or separate tasks. In a meeting context, multitasking includes checking one’s email, text messages, social media accounts, completing other work tasks during the meeting, or even browsing for the latest Amazon prime discounts (tempting, right?) during the meeting itself. Essentially, multitasking during a meeting is working on any separate task that is not relevant or beneficial to the current meeting.

With virtual meetings currently making up a huge portion of all meetings, comes the increased temptation to engage in these multitasking behaviors. We need our laptops or desktops to engage in the meeting and the entire Internet is always at our fingertips. Consequently, the ease of multitasking is both inviting and enticing - and we think it goes unnoticed by our coworkers (but remember, everyone knows). We feel we can ‘get away’ with reading an email from our boss during a team project meeting when we are hidden behind a computer screen in a home office. And who will really notice if your eyes deviate from the computer screen to check the football score on TV?

Well, the quality of your work and your retention of information will notice. But more on that later.

The point is: We all think we’re good at multitasking. We feel more productive when we can multitask during meetings. An hour-long meeting offers an opportunity to listen to project updates… while also responding to pressing emails* (*researching your next vacation spot). It’s a win-win. Optimal use of the hour. Right?

The Science Is Against Multitasking

Likely not. A study conducted by Stanford showed that multitaskers consistently performed more poorly than students who didn’t multitask in a series of exercises, and heavy multitaskers performed worst of all. According to Forbes, multitasking can lead to a drop of 40% in productivity, which suggests multitaskers may be wasting company time and resources with their attempts at task juggling. These studies seem to debunk the myth of having “the gift” of being able to multitask well.

And the multitasking messiness doesn’t stop there. Also according to Forbes, a study conducted at the University of London revealed that participants who multitasked on intellectual exercises “...experienced IQ score declines that were similar to what they'd expect if they had smoked marijuana or stayed up all night. IQ drops of 15 points for multitasking men lowered their scores to the average range of an 8-year-old child.”

This suggests multitasking can temporarily lower your IQ! That can’t be good for coming up with innovative strategies during meetings or making optimal decisions. If part of your team is multitasking, all hands – and brains – are quite simply not on deck.

What Can You Do to Keep Your Team Engaged? 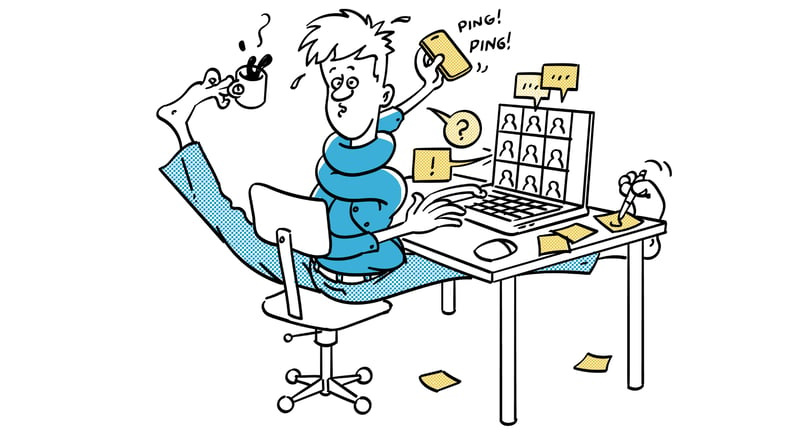 Ah, yes. The age-old question. Well, short of taking away everyone’s phones and laptops and having the meeting at a movie theater where the sole objective of the meeting is simply to watch the movie, you’re probably going to run into some multitasking. However, there are some strategies you can employ to keep your team engaged in your meetings and keep multitasking at bay.

Although these three meeting attributes are shown to contribute to meetings beyond just preventing multitasking, they are a crucial way to keep your team focused on the task at hand. A written agenda sent out to the team ahead of time allows employees to know what type of meeting is being held and how they should appropriately prepare. It can also allow meeting attendees to have ownership of the meeting or ownership of certain items/topics on the agenda, and therefore be more prone to participate during the meeting. This will naturally minimize multitasking during the meeting itself – since the agenda is relevant to all parties involved.

Like having a pre-set agenda (which should be a digital document that relevant stakeholders or presenters can contribute to prior to the meeting), a clear structure should also be laid out for the meeting. An agenda is useless if all the agenda says is “Discuss Sales” and “Review Budget”. Discuss what about sales? What budget are we discussing? There should be a structure to your agenda, including allotted times for each presenter and specific itemized discussion points. Perhaps you assign Randy as the first presenter, give him 10 minutes on the agenda, and his topic is “How to Improve Sales Leads Over the Next Month.” See how much more specific and interesting that is? It will focus your team, especially if they know the agenda ahead of time. It will let the group know what to expect, and hopefully by attaching a specific coworker to that agenda item that they will want to be respectful and pay attention to their colleague.

A third way to prevent meeting multitasking: don't invite employees to meetings that are irrelevant to them (or only invite them to the portions of meetings they need to attend). This will save them frustration while keeping them on a need-to-know basis. They will likely pay attention to the meeting because the information is important and necessary to them, and bonus perk: they will feel as though their time is being respected by not having to sit through parts of meetings that don’t apply to them. It will mitigate multitasking by only asking the participant to be hyper-focused on tasks and discussions that apply to them.

Lastly, when building your agenda and laying out the structure for your meeting, allow for some form of input, voice, and feedback. Whether it’s the “Speak Now” function that Decisions meeting management software provides or letting meeting attendees virtually raise their hand – let your guests interact with the meeting. It will foster creativity and collaboration, and keep employees engaged - and away from multitasking.

The High Cost of Multitasking

Aside from potentially temporarily lowering a team member’s IQ, when multitasking interferes with team productivity and contributes to useless meetings, the result can be costly.

Research shows that $399 billion was lost to bad meeting in 2019, and 34 percent of American workers consider useless meetings to be the biggest cost to their companies. So, if you’re going to hold meetings, make them intentional and structured to make them count.

More and more organizations are turning to meeting management software to fix their meeting pains. A meeting solution software, like Decisions – which integrates easily into Microsoft Teams, Outlook, and 365 - helps meeting admins create concise agendas and structured meetings that spark team engagement and will help minimize multitasking. With Decisions, all meeting documents can be uploaded beforehand, agenda items can be suggested by all participants and guest attendees can be invited to the specific portion of the meeting that concerns them. This can help solve the meeting zone-out by providing structure and direction.

Best of all? Decisions will record tasks assigned and decisions made in the meeting into an easily downloadable PDF so everyone has a record of the meeting and is prepared for the next meeting. Preparation = engagement = less multitasking. The math is simple.

While we can’t promise Sam in HR won’t check his Tiktok in a meeting ever again, meeting management software can certainly keep attendees more focused and engaged at the task at hand. In fact, 70% of Decisions users said they experienced more energy and more productivity in their meetings since downloading the software.

And all of this begs the question: Did I check my phone while writing this article? Absolutely. Will I try to stop doing this in the future? Absolutely – gotta keep that IQ up!

Haven’t tried Decisions yet? Click here to start your FREE trial today!
You’ll be on your way to better meetings in no time!

Elevate your meetings with a (free!) downloadable agenda template

Studies show 63 percent of meetings do not have an agenda. Set your meetings up for success with our free, downloadable agenda template.

Are Your Meetings Inclusive? If Not, You May Be Paying a Price

Meetings, in some sense, represent a microcosm of larger issues in society. If you aren't hearing everyone's input, it could be costing you.

Measure your meetings with the Meeting Engagement Score™

Better meetings are possible. The Meeting Engagement Score™ from Decisions enables teams to assess the effectiveness of their meetings.

Get notified on new meeting and productivity insights

Sign up for our monthly newsletter full of meeting productivity and collaboration tips, tricks and real-world examples. See how the future of work is already upon us.